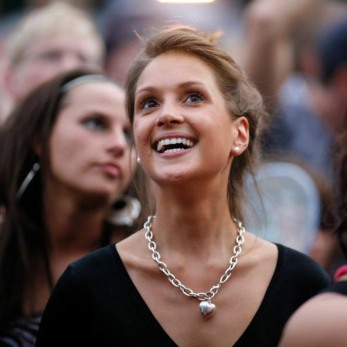 After a long, long flight I finally arrived in Sydney. My first stop was Bondi Beach where I travelled from the airport by bus. The view was amazing, driving down the streets and finally seeing the ocean. Yes, that was the moment, that was freedom, that was it. 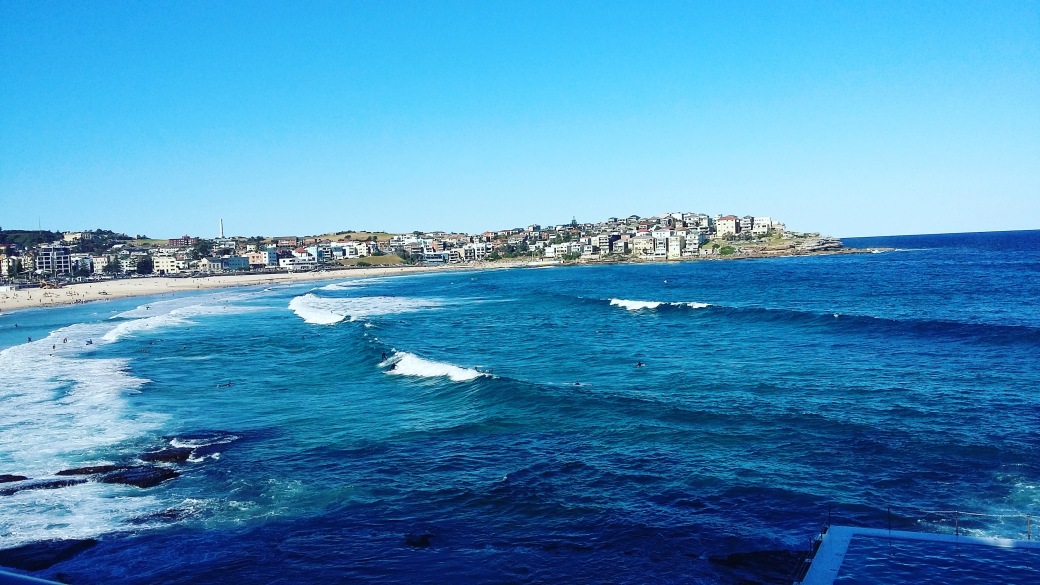 I booked my first Air bnb Appartement before so I got to my hostel by late evening. I quiet loved this place. I’ve had a single room (so expensive for me as a German, 76 EUROS a night) and a big rooftop where I’ve enjoyed breakfast and barbecue).

The first days in Bondi I’ve been looking for a job. I had my working holiday visa so it shouldn’t be too hard to find a job, also I had a quiet good CV and been pretty successful in managing restaurants and events. So again my friend from home called me and told me about The Icebergs in Bondi Beach. I sent my CV and the same evening, the manager called and asked me for an interview. I got the job the next day and the third day in Australia I started working. 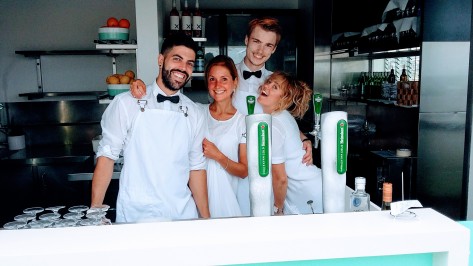 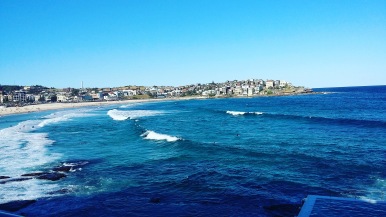 events at the Icebergs

But since I am used to this kind of crazy busy work I somehow managed it to work long, long hours again. I loved the team and the vibe over there. Something so different, so energetic, so going on. The music, the people, the wild ocean you see all the time, the alarm when sharks are coming or someone got lost while surfing and helicopters coming… This special vibe got me.

I’ve been earning a lot of money over there, I saved around 6000 Australian Dollars in 3 months working in The Icebergs (!!!!!!!!!!!) but since I was travelling and didn’t know where my journey would be taking me, I thought it is better to save money now than being stucked later. Oh, one thing I forgot to say: I left Germany with around 3000 EUROS I saved before.

I’ve heared about the Blue Mountains near Sydney and as I love adventures ( or more my journey told me that I love adventures) I borrowed a tent of my friend from The Icebergs and left to the Blue Mountains by train. I got there by midday, setup my tent in the heat and decided to go walking. The Blue Mountains are incredible, pure nature and loads of tracks and walks you can do. Well, I fount out that I loved adventures and since I have never been very careful in my life before, I just walked out, followed any track without getting information before about the area. Very stupid!!!!!!!

The Blue Mountains are amazing but you need to be careful just walking out there. There are loads of tracks you can follow but it seemed to my suddenly like a labyrinth. It got late and there were no people anymore. It was around 4 pm and all of a sudden it got dark. And millions of flies. I got worried, didn’t know where I was and I didn’t have any more water with me. Hell, that was scary.

I went up some stairs somewhere near the Three Sisters, Echo Point Katoomba, and got very nervous. Then two guys came out of the jungle, two backpackers. I was soooo happy to see people, I started crying.

Of course, I spoke to these two guys and I was amazed again what they’ve told me. They prepared for trekking in the Himalayas over here in the Blue Mountains and just came back from walking the Six Foot Track. I didn’t know what it is. So I asked and they explained:

The Six Foot Track was originally a bridle trail from Katoomba (New South Wales, Australia) to the Jenolan Caves, and is now a walking trail of 44.3 kilometers. You need to leave at a special time to get to the first campsite where most people camp the night before the demanding climb up to Mini-Mini Saddle the next morning and then the descent to Alum Creek.

Well, they told me their story about their last days walking this incredible long and difficult track and what I did find even more astonishing, is how they prepare for this track. Times are set precisly when to leave and where to leave, you need to follow time to get to the campsites before it gets dark and also you have to think about food and water. Water seems to be the biggest challenge, they’ve told me. That’s the heaviest thing they are carrying in their backpacks. Then they do have their filters with them for filtering more water from the lakes around. WOW! Since I do love adventures I wanted to hike with them once so we shared telephone numbers- just in case. They walked me back to my tent, I prepared my dinner on a Bunsen burner- so old school but it worked- and felt into ‚bed‘. Another thing I didn’t know: It got freezing during night. During day the temperature was about 30 Degrees and by night it cooled down to around 7 Degrees. I was freezing like hell.

When I got back to my beloved Bondi Beach, I was so happy that I’ve made the experience but also very, very happy to be back.

Some more days working at the Icebergs, meeting loads of great people, spending my breaks in the swimming pool or in the ocean right in front of the restaurant but also being pretty tired because of working (crazy hours, as I said).

Than again something crazy happened. I met a girl from Hamburg, Germany and we got along pretty well. She told me that she is looking for a place to stay so I offered her to stay at my place. We’ve had a great time. She didn’t have a working holiday Visa though, so for her it was hard to find any job. One day I came home from work she told me something special. THAT SPECIAL, THAT I WILL NEVER FORGET THIS DAY SHE TOLD ME ABOUT IT!!!!

„Anna, I will leave for living in an Ashram for a while.“

„What the hell is that, Babette?“

„Well, I don’t really know. I think it is a place where they meditate, do Yoga and live by themselves, grow food on their own and stuff like that. Also they do woofing.“

(Woofing is such a great thing in Australia and in Newzealand and so easy. It’s something like that:

WWOOF organisations connect people who want to live and learn on organic farms and smallholdings with people who want to share their lifestyles, teach new skills and welcome volunteer help. There are places in Africa, Americas, Asia, Europe, Middle East and Oceania.

WWOOF hosts offer food, accommodation and opportunities to stay and learn about organic/biological growing and farming.
WWOOF Volunteers give hands on help and have an interest in learning about organic farming and gaining skills in sustainable ways of living.

WWOOF is a network of national organisations. They have local knowledge and up to date information about WWOOF volunteering in their country. To become involved in the WWOOF community either at home or away explore the drop down menu above or list below and connect with the local WWOOF organisation directly.)

So as soon as I heared about her plan, we googled ‚Ashram‘.

„Traditionally, an ashram-Hindi (Sanskrit ashrama or ashramam) is a spiritual hermitage or a monastery in Indian religions.“

So well, we signed up for Mangrove Yoga Ashram in New South Wales. We actually had to apply for it and fill out a questionaire, which they’ve sent to us. There were different questions, for example if we are living a vegetarian or even vegan lifestyle, if we do have knowledge in Yoga and Meditation , if we do have any knowledge in hospitality, kitchen, gardening, maintaining, and so on. Also they’ve sent us the rules right away:

Puh, what was that? Never heared about something like that, in the beginning it sounded a bit like prison but I was so excited and really wanted to go. So was Babette. Around two days later we got the decision: I got the approval, Babette didn’t. No clue why.

Well, when the day got closer and closer I got more and more unsure. Leaving Bondi Beach, my sweet life over there with my friends, Aperol Spritz, my freedom for… what?

Yes of course, for the experience BUT….! I cancelled and kept on working in the Icebergs. But I thought about the Ashram and the opportunity almost every day, I even dreamed about it. So one day I applied again and got accepted again, yes!!! I was so happy. Than I met this guy in our restaurant while a function just five days before leaving, we had a wonderful time, my last day in Sydney he invited me to stay in the Four Seasons Hotel (I got a Suite!!!) and no worries, he stayed with his boss in The Langham so I had this wonderful Suite on my own. It felt so strange to have this luxus after travelling and living like a backpacker. The next day I left to the Ashram.